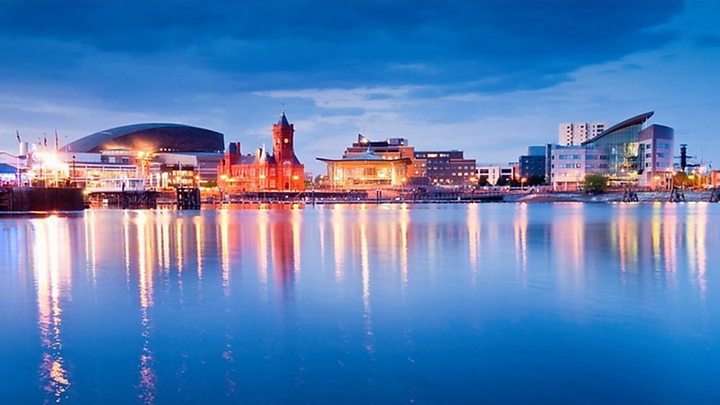 Cardiff Bay and Cardiff City – Just 20 minutes by car from Glamping Trem-Y-Fro. Or catch the X2 bus which stops at the end of our Lane approximately every 30 minutes.

Cardiff owes much of its history to the Industrial Revolution of the 1790’s, which stimulated mining in the valleys of South Wales. It also gave rise to the building of the Glamorganshire Canal in 1794, which brought iron and coal down from the valleys. As this industry expanded it became obvious that a more efficient form of transport was required and in 1840 the Taff Vale Railway opened.

This rapidly increasing iron and coal trade was also the catalyst for the construction of a number of docks during the 1830’s. These included the Bute West Dock, which was the first dock to be opened by the 2nd Marquis of Bute in 1839 and its seaward entrance known as the Oval Basin, the Bute East Dock in 1855, Roath Basin in 1874, Roath Dock in 1887 and the Queen Alexandra Dock in 1907.

During this time, Butetown and the surrounding dockland area grew into a cosmopolitan community with seafarers from all around the world making Cardiff their home. It is estimated that people from at least 50 nationalities settled in this area, which became known as ‘Tiger Bay’ This kaleidoscope of settlers helped to build the docks, worked aboard the ships and helped to service this industrial and maritime city.

By the 1880’s, Cardiff had transformed from one of the smallest towns in Wales to the largest and its port was handling more coal than any other port in the world. On the eve of the First World War in 1913, coal exports reached their peak at over 13 million tonnes. At this time the international price of coal was struck in the Coal Exchange building and it was here that the world’s first £1 million pound deal was signed.

After the Second World War, however, demand for coal slumped and international markets were lost as other countries developed their own steel industries. Trade was increasingly lost to container ports and by the 1960’s coal exports had virtually ceased. In 1978 East Moors Steelworks closed with the loss of 3,200 jobs and this dealt a further blow to South Cardiff.

By the early 1980’s Cardiff Bay had become a neglected wasteland of derelict docks and mudflats. Its population suffered from social exclusion and had above average levels of unemployment.

Tiger Bay, now known as Cardiff Bay – Cardiff’s dockland district – is Wales’ oldest multi-ethnic community. Sailors and workers from over 50 countries settled here. Some of the largest communities included the Somalis, the Yeminis, and Greeks. Residents of many races and backgrounds socialised together and intermarried, creating a distinct community. Tiger Bay was also notorious.

A slice of red-light district and gambling dens between Cardiff’s city centre and its docks, and home to a rich mix of multi-racial communities, it had a powerful character of its own. Its most famous former residents are former rugby star Billy Boston and singer Shirley Bassey, who were both born in Tiger Bay.

The 1960s saw the wholesale destruction of large areas of the Bay and displacement of the community.

The 1970s and 80s saw a new influx of refugees from conflicts around the world, and the 90s saw the birth of the renewal of the area as a leisure and business hot-spot and the founding of the National Assembly for Wales.

Today, the Cardiff docklands area is known as Cardiff Bay and it has been transformed by the Cardiff Barrage that impounds the Rivers Taff and the Ely to create a massive fresh-water lake. A number of boat tours operate from Mermaid Quay, which allow you to gain an understanding of the history and fauna of this exciting and upcoming area. There is also a water taxi service which operates throughout the year from the Bay to the city centre and Penarth.

Cardiff Bay is home to a number of attractions such as Techniquest Science Discovery Centre ideal for all the family, Craft in the Bay, The Welsh Assembly at the Pierhead, Butetown History and Arts Centre, the Norwegian Church Arts Centre and the Wales Millennium Centre, a stunning international arts centre. The Red Dragon Centre provides further options for family entertainment.

The harbour at Cardiff Bay experiences one of the world’s greatest tidal ranges up to 14m. This has meant that at low tide, it has been inaccessible for up to 14 hours a day. The new barrage will eliminate the effect of the tide, which has acted as an inhibitor to development, releasing the potential of the capital city’s greatest asset its waterfront.Don’t forget to look up the opening time Cardiff post office for where you will be traveling to and staying. Many people don’t realize that there is a significant time difference that will not only play a role in your sleep schedule, but also in your communication efforts to those still at home.

The construction of the barrage is one of the largest engineering projects in Europe. Completed in 1999, it has created a 500 acre freshwater lake with 8 miles of waterfront and it is hoped it will stimulate the future development of the Bay as a tourist and leisure destination. Cardiff has been named as one of the top 10 cities in Europe. Over 319,700 friendly people live here and call it home.